What Makes a Kayak a Sea Kayak? 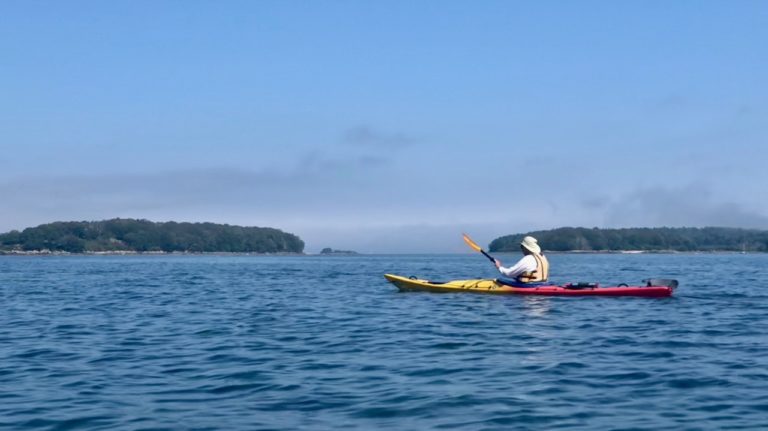 Kayaks come in all shapes and sizes. Manufacturers build boats in a variety of different categories – white water, recreational, racing and sea kayaks are some of the general categories of boats. Within each category there are specialty kayaks like creek boats or surf boats that excel in a specific discipline.

When it comes to paddling on the ocean you should be thinking about a sea kayak. These boats are designed to handle wind, waves and tidal currents that you might encounter on the ocean. But what, specifically, makes a kayak a “Sea Kayak”?

A bulkhead is a vertical wall that divides the boat into different compartments. Recreational kayaks and white water boats may not have any bulkheads or may have a single dry compartment in the rear.

Sea kayaks, by contrast, have at least 2 sealed compartments – one in the front and one in the rear of the boat. If you capsize and end up in the water, those sealed compartments will help to keep the boat afloat and allow you to re-enter the kayak safely, bail out the cockpit and carry on paddling. This is especially important when you are paddling more than swimming distance from shore.

The boat pictured above has 3 bulkheads – one in front of the cockpit, one behind the cockpit and one further to the rear of the boat. The small round hatch just behind the cockpit is referred to as a day hatch. It is designed to be accessed by the paddler while on the water and to store essentials that might be needed while paddling. It is separated from the rear compartment to prevent a mishap from flooding the entire rear section of the boat through the day hatch.

So look for a kayak with at least a front and a rear hatch to keep you safe at sea.

Sea Kayaks have 2 types of deck lines affixed to the boat.

Perimeter lines run around the edge of the kayak around the bow and the stern of the boat. These lines are static lines – they are made of rope that doesn’t stretch.

The perimeter deck lines are there for safety. If you capsize your boat, you can hold on to the lines to stay with your boat. Your partner can grab the lines to stabilize the boat when performing a rescue. A tow line can be clipped to the perimeter lines to allow another paddler to tow you to safety.

The cockpit on a sea kayak is designed to allow the paddler to use a spray skirt to keep water out of the cockpit. The most common cockpit shape is the keyhole cockpit. The cockpit opening is elongated and narrows to the front – a bit like an old-fashioned keyhole.

The cockpit opening has a rim that allows you to pull a spray skirt over the cockpit to seal it. The seat back on a sea kayak is usually low to accommodate the skirt. On a choppy day on the ocean it will quickly become apparent why a spray skirt is a good idea!

For more advanced paddlers, a spray deck and sealed cockpit is essential if you are trying to roll the kayak.

Sea kayaks tend to be longer and narrower than recreational or white water kayaks.

A longer boat is faster on the water, tracks better and can also carry more gear. This is especially important in sea kayaking where the distances you travel are often much greater than recreational kayaking. Touring sea kayaks are around 17 feet long and can carry enough gear for a week on the water. Most sea kayaks are typically between 15 and 18 feet long although there are shorter and longer sea kayaks.

A narrow boat is also faster but it is less stable than a wider boat. This “tippy-ness” is actually an advantage in wind and waves. A wide, stable boat will get tossed around more in rougher seas. A narrow, less stable boat will actually feel more stable when conditions are choppy or in larger waves. It does take some getting used to, but a narrower boat is definitely an advantage.

Rudders or skegs are used on a sea kayak to help the boat track straight in wind and following seas. A kayak will tend to turn into the wind when paddling and get pushed off course by following seas. When paddling longer distances, it is really tiring if you are constantly trying to correct for wind or seas.

A rudder is usually mounted on the rear deck and flips down into the water when needed. The angle of the rudder is controlled by the paddler’s feet on the foot braces in the cockpit. Many people don’t realize that the rudder is there not to help the kayak turn but to help it go straight!

A skeg is a fixed fin that drops down from a slot in the rear of the kayak. You can adjust its depth to offer more or less resistance to the effects of the wind or seas. Unlike a rudder, you cannot change the angle of the skeg.

There are many different boats out there that qualify as “sea kayaks”. If you’re in the market for a sea kayak, keep in mind some of the important characteristics

If you would like to learn more about sea kayaks and ocean paddling, join the AMC Boston Paddlers on a trip or a class! 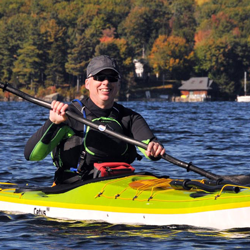 We are Boston’s Paddling Community!